Scouts are the third section of the Scouting movement.

From the first experimental camp for 20 boys in 1907, the movement now has an estimated 28 million members worldwide, and in the UK alone there are over 499,000 boys and girls involved in Scouting. An increase in adult volunteers means that more and more young people are now able to take part in their own big adventure.
The Scout Section is for young people, usually aged between 10½ and 14 years. A young person can come into the Troop at 10 and may stay until they are 14½ years old. The Scout Troop is the third section in the Scout Group, above Beavers and Cubs.

Under some circumstances, Scouts can join the Pack as young as 10 if, for example, they have friends joining at the same time, or are mature enough to move on early from Cubs, (and there is space in the Pack).

A Scout Troop is divided into small groups called Patrols, each headed up by an older Scout called a Patrol Leader, and often with an Assistant Patrol Leader.

Scouting is about being with friends, as part of a team, and participating fully in the adventure and opportunities of life.

Scouts are encouraged to take part in a wide range of activities as part of their programme. Participation rather than meeting set standards is the key approach, and for the Scout who wants to be recognised for his or her achievements there are a number of Challenges awards and activity badges. 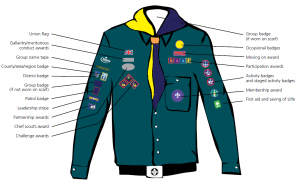 More information on the badges available to Scouts can be found here.

There are a number of variations of the Scout Promise to reflect the range of faiths, beliefs and attitudes, and nationalities, in the UK within Scouting.

The Scout Promise poster is available to order from the Print Centre, or can be downloaded here.

In the name of Allah,
the Most Beneficial
and the Most Merciful,
I promise that I will do my best
to do my duty to Allah
and to the Queen,
to help other people
and to keep the Scout Law.

For Christians, Jews and Sikhs

On my honour,
I promise that I will do my best
to do my duty to God
and to the Queen,
to help other people
and to keep the Scout Law.

For Hindus and Buddhists

On my honour,
I promise that I will do my best
to do my duty to my Dharma
and to the Queen,
to help other people
and to keep the Scout Law.

For humanists, atheists and those with no defined faith

On my honour,
I promise that I will do my best
to uphold our Scout values,
to do my duty to the Queen,
to help other people
and to keep the Scout Law.

For subjects of independent Commonwealth countries, foreign nationals and individuals who are stateless the following wording can replace ‘duty to the Queen’

…to do my duty to the country in which I am now living.

Further information about The Promise in Scouting can be found here.