Cub Scouting is one of the great success stories of the last 100 years.

Cubs is the second section of the Scouting movement, originally started in 1916 for younger brothers who wanted a ‘look-in’. In nearly a century, the section has constantly evolved and adapted its programme and methods to meet the changing needs of each generation of young people, and these days admits girls as well as boys.
Cub Scouts are young people aged between 8 and 10 1/2, who make up the second section of the Scouting family, between Beavers and Scouts.

Under some circumstances, Cub Scouts can join the Pack as young as 7 1/2 if, for example, they have friends joining at the same time, or are mature enough to move on early from Beavers, (and there is space in the Pack).

Such decisions are taken by Cub and Beaver Scout leaders.

A Pack of Cub Scouts is organised into Sixes, with each Six named after a colour, and a Sixer and a Seconder in charge.
The recommended maximum size of a Cub Scout Pack is 30 Cub Scouts.

To meet local circumstance this maximum number may be increased, either in the long term or the short term with the agreement of the Group Scout Leader.

During their time in the Pack, Cub Scouts will get a chance to try lots of different activities like swimming, music, exploring, computing and collecting.

There are a range of badges available which Cub Scouts can wear on their uniforms to show everyone how well they’re doing. 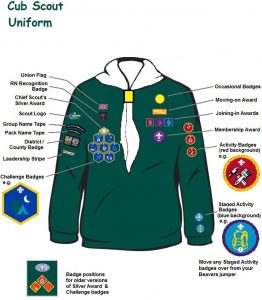 More information on the badges available to Cubs can be found here.

There are a number of variations of the Cub Scout Promise to reflect the range of faiths, beliefs and attitudes, and nationalities, in the UK within Scouting.

The Cub Scout Promise poster is available to order from the Print Centre, or can be downloaded here.

For Hindus and Buddhists

I promise that I will do my best
to do my duty to my Dharma
and to the Queen,
to help other people
and to keep the Cub Scout Law.

I promise that I will do my best
to do my duty to Allah
and to the Queen,
to help other people
and to keep the Cub Scout Law.

For humanists, atheists and those with no defined faith

I promise that I will do my best
to uphold our Scout values,
to do my duty to the Queen,
to help other people
and to keep the Cub Scout Law.

For Christians, Jews and Sikhs

I promise that I will do my best to do my duty to God
and to the Queen,
to help other people
and to keep the Cub Scout Law.

For subjects of independent Commonwealth countries, foreign nationals and individuals who are stateless, the following wording can replace ‘duty to the Queen’

…to do my duty to the country in which I am now living.

Cub Scouts always do their best
Think of others before themselves
And do a good turn every day.